This is an adventure that two of Pack & Paddle’s Trip Leaders took in December of 2013. It is quite the story! Read on:

I wanted to have a kayak adventure

in the Atchafalaya Swamp since the weather cooled, luckily I’m not the only one. Kevin and I, both guides for Pack & Paddle, made a plan to cross the Atchafalaya Swamp between Christmas and the New Year. Other folks were interested but just couldn’t make it so Kevin brought one of his sons, Grant, along.

We planned to use the same route that I used the last time I crossed, a January trip. I had to drop my truck off in Bayou Sorrel, our final destination, so I stopped off in Henderson at LA Marketplace to take a look at the LA made arts and crafts. There I found a piece of artwork that I had to have from way in the back of the long store. As I walked to the front of the store, I came to realize that this piece of art was going to become the mascot on our trip.

I made my way to Dean and Cara’s house, the Atchafalaya Basinkeepers, and visited while I waited for Kevin and his family to pick me up on their way home from visiting family in New Orleans. The next morning Kevin picked me and my boat up at 7am and headed to the Catahoula Landing at the West Atchafalaya Basin Protection Levee. We talked to a few gentlemen launching their boats and told them what we were going to do. There was lots of joking about needing a motor and such, as well as a very generous offer to stop off at Mr. Huval’s camp to pitch our tents.

Not long after we launched, an adult bald eagle flew overhead to perch on a leafless tree. We all got a great look at the bird before it flew off to land away from human eyes. We headed south until we met up with a pipeline canal to head east. Along the way we saw a beaver and then saw two more. I heard something moving around under a mass of roots along the waterway, as I passed it made its way out of the tangle and plunged into the water.

As Kevin and Grant, also known as Wasp Whisperer and Dis’patch, made their way to the tree the other beaver emerged from the other side of the tangle. Eight miles into the trip one of the pipeline canals brought us to Long Lake, which is not a lake at all, but a bayou. This is where you really start seeing camps and all of the hunters out for a few days of hunting.

We paddled 1.5 miles upstream to the

confluence with the Atchafalaya River. Where we meet the Atchafalaya River there is a bit of current flowing into Long Lake. Kevin and I took opposite sides of the bayou to see if one was harder than the other but both seemed pretty equal and it wasn’t too bad at all. Not long after we entered the Atchafalaya River, we found state land to camp on, the same spot we camped last time I did this trek. We had a nice fire for a cold night, we walked out to the river just before retiring and saw a river otter swimming up the river.

At about 5am I awoke to rain so I got up and hung my tarp over my tent to have a dry place to pack and to try to keep my tent somewhat dry. When I rose at 7am I was able to refill my water bottles with rain that had collected on my tarp, this meant I had plenty of water for the rest of the trip and would not pump water from the swamp.

As we left our campsite we had to portage over a pipe that crossed the ditch we paddled into. I slipped off of the pipe making sure to fall backward onto a dry bag in my boat. My next try was good on the pipe but I slipped off of the branch my other foot was on and plunged one leg into cold water up to my knee. We all had a good laugh and I had a wet leg all day.

We passed lots of hunting camps out here and a couple of houseboats but the one camp that really sticks out is the camp refashioned of an oilfield storage tank. Good reuse of a potential eyesore. Near the confluence of Whiskey Bay, we found Mr. Huval’s camp and stopped off to visit. They invited us indoors where we sat and chatted for a while and I used their warm bathroom before we left. They were just some nice folks who showed us kindness and concern, Mr. Huval even offered to ferry us across Whiskey Bay. I thanked him but declined.

Researching for our first crossing, a friend and government employee strongly suggested that we ask the Sheriff’s Office to ferry us across and told me horror stories of boats flipping in the current and people drowning. And believe me, I can see how this happens. One of the benefits though of traveling by kayak is that you are close to the water and are working with it, not against it like a motor boat. We paddled upstream on Whiskey Bay for a ways before we started to cross it. The reason for this is Jake’s Bayou is directly across Whiskey Bay from the Atchafalaya River and if ferried across at that point we would end up way downstream.

The side of Whiskey Bay that we paddled up is much easier because it is inside a big turn, the other side has much more current. There is a strong current in Whiskey Bay and once you get about ¾ of the way across you hit the trench at which point the current throws you downstream. The whirlpools, eddies and such grab your paddle in a river like this making it a bit hard to steer at times.

We all made it safely across and into Jake’s Bayou but something was amiss there. The canal we planned on taking has been completely closed off. We spoke to some hunters at a camp before docking at a pipeline. A nice fella offered to drag our boats a ways down the pipeline to access the canal but another fella came back from hunting and said there was a huge sandbar further down and it would be a longer portage. Well it’s time to change our plans.

We continued down Jake’s Bayou and I realized my camera was not under my PFD. I had to once again paddle upstream while WW and Dis’Patch waited for me. I found my camera about 30 feet from shore on the pipeline. I also had to paddle upstream on the Atchafalaya River to retrieve my glasses from Mr. Huval’s camp the day before.

We spent the entire day in the rain, it looked as though the sun wanted to peer through the clouds but it was not to be for today. I paddled all day in the cold rain with good wool socks and chaco sandals from pack and paddle and was comfortable. I did have waterproof hikers and two extra pair of wool socks just in case I needed them though.

Wasp Whisper and I, oh by the way I was dubbed Scat on the previous Atchafalaya Basin crossing because of my propensity to dissect animal scat to identify the offender and what it ate. So WW and I both thought about bringing our bilge pumps before we left but neither of us did so WW fashioned a found water bottle into a water scoop. Surprisingly this worked very well in our Native Watercrafts, Ultimate, kayaks.

On some maps the name of Jake’s Bayou changes to Bloody Bayou…I’m not sure why it is named this and not real sure I want to know. So our new plan was to head over to Bayou Pigeon, which also has a name change on some maps to Bayou Sorrel which will cut about 2 miles off of our trip. We found a good place to camp on state land once we arrived on Bayou Pigeon, and yes it is till raining. No fire tonight. WW and Dis’Patch set up their tent and crawled inside.

I sat outside a while on my handy, lightweight and compact Helinox chair under my tarp to take in the sights and sound of the swamp. I love the swamp and the experience of hot, cold, wet or mosquitoes is all part of it, the experience of what our people before us came across in this swamp amid its beauty. The rain stopped during the night, a very welcomed event. The rain did however bring us a wonderfully mysterious, foggy morning which made the day before worth it. And when the sun rose and shone on us and lighted the white puffy clouds against a beautiful blue sky, you remember why you sometimes go through a little misery living a life outdoors.

We stopped along the bayou to

play a little bit on our way to Indian Mound Boat Landing, we only had 6 miles to cover this day. It was an absolutely gorgeous day. I walked across the levee to Dean’s house to get my truck, we loaded our boats then went back to shower before we took a ride to Bayou Pigeon for lunch. Drove back to Catahoula Landing to pick up Kevin’s truck and headed home with another cool adventure ready to peek around the corner.

We paddled about 10 miles the first day, about 14 miles the second day with only 6 miles the last day. We found most people to be extremely hospitable. Inviting us into their camps, offering a wave and kind word, offering to portage our boats,offering us food (even though we didn’t take it) and liquor (we didn’t take that either as we needed our wit before crossing

Whiskey Bay) and even offering to ferry us across Whiskey Bay.

It was great to see how all of these folks take it upon themselves to make sure others are okay in such a secluded place. It is another world, one that most people would never understand but here we were, paddlers, adventurers, in a place where people are serious about the search for food. Some would think that we cannot co-exist but I know that we are after the same things, an environment that is healthy, that can support biodiversity, that will be here for generations to come with as little human impact as possible. If this should happen then we can rely on our amazing swamp to do the job that is meant for it to do, to clean our waters, to supply us with food, to afford us endless opportunities to behold its beauty and to sit within that beauty knowing there is no place else on earth that we would rather be.

And the fine piece of art attached to the front of my boat, well it was dubbed, “Sir Jake du Bayou,” boat protector and swamp traveler extraordinaire that brings all good things your way. Thank you Sir Jake du Bayou!! 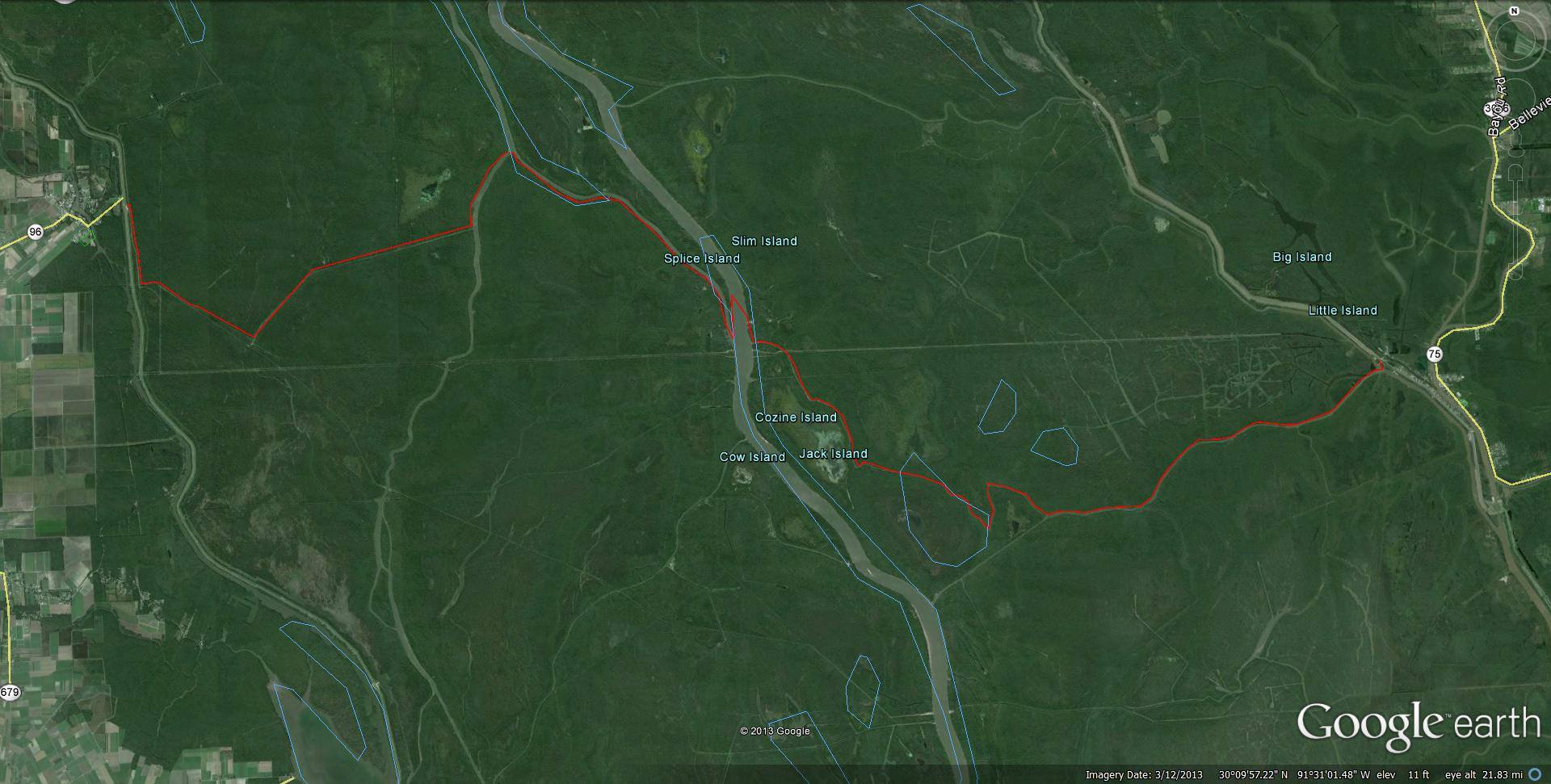