When in Doubt, Pause – An Adventure on the Backbone

Home Uncategorized When in Doubt, Pause – An Adventure on the Backbone

When in Doubt, Pause – An Adventure on the Backbone

Hiking is one of my passions, everything about it is engaging; from the burn of pushing through an elevation change, to the promise of a new perspective and view once you get there, to the art that nature 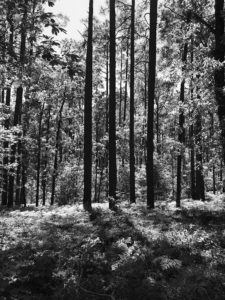 creates, and yes – even the bug bites, which remind me of my trip. Leaving the mountains for what I thought was just flat land felt crazy. Then I discovered Kisatchie National Forest. The Backbone Trail was just as challenging and lovely as any I have ever done, maybe even more so, for many reasons we will get into in a minute.

This would be a wonderful trail to do for an overnight, in fact I saw a handful of people with packs doing just that. Campsites with fire rings abound atop vistas with sprawling, gorgeous views. The trail itself is
about 7.5 miles, but it isn’t a loop. If you aren’t going with two vehicles you will need to walk back on the road, which is an additional 2.5 miles or so. This is about a two-hour drive, and it is quite the hike; I suggest leaving in the early morning so that you can be leisurely and enjoy the hike as you go along. My husband and I brought the doggo’s with us, and one of our pups, well . . . she’s a little chunky. Plus, she is older, and Sissy loves walks but really can’t, or rather shouldn’t, be doing 10 miles. We decided we were going to be super smart.

Our plan was this: We park at the Caroline Dorman Trailhead (the end of the Backbone, right across the road), hike as far as it seems Sissy could handle, then he would turn around with her, get the truck and meet me at the Backbone Trailhead (the actual starting point of the hike). It seemed like a foolproof plan. Here’s the thing – for foolproof plans, you can’t use a foolish person. Buckle up kids, we’re going for a ride. 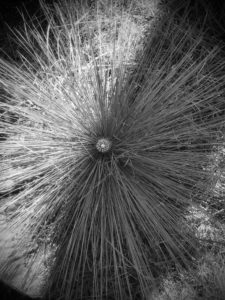 Out of the gate this place blew me away. I didn’t know places like this existed in Louisiana! I felt so at home, peaceful, captivated by the beauty, intrigued by all the unique little pieces, and in awe of how it reminded me of high desert hiking. What I noticed, again, was how welcoming this place felt. Dead trees laying on the ground had almost been pulled into the earth. Grasses, moss, foliage unfamiliar grew up around them as if to say, “Sha, it’s okay ba-by, you come here – Mama fix you up good”. This is not how it is in the high desert. If you have fallen, then you must break down on your own. The earth is hard, packed, rigid. Not as malleable, movable, and forgiving as it is here.

It seemed that, wherever I gazed, trees were expressing themselves with twists and curves as if they were movers and shakers on the dance floor. How something so seemingly stiff and slow moving can create such graceful arcs and twists is amazing, especially when it’s only a handful amidst other trees that are perfectly straight and still. How fortunate we all are to live somewhere that is full of laughter, music, and dance, even in nature.

The only initial (minor) set back was that I usually hike in my Chacos, but for whatever reason I chose my hiking boots, of which I normally reserve for doing some serious distance with weight. I guess I was feeling nostalgic. This was only a setback because there were some creek crossings and my hiking boots are waterproof. So as not to be hiking in a bucket of water, I had to stop, take the shoes off, wade across barefoot, dry my feet off, and then put my shoes back on. Which, none of that is really a problem, per se, it was just more of an inconvenience that anything. I would recommend wearing a good hiking sandal, or a trail shoe that is NOT waterproof (so it drains) and is good to wade through water that is anywhere from halfway up the shin, to being knee deep. 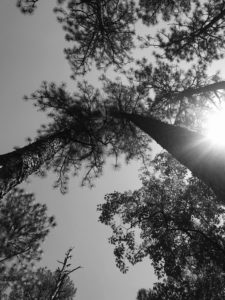 So, there I was, just my dog and I, hiking along merrily, not a care in the world and having the time of our lives, when the trail came to a “T”. It wasn’t marked with which way to go. I hadn’t been paying attention to where I had already been. I didn’t have a topography map because, why would I? It’s been clearly marked and is a regular trail not a wilderness trail. I look at the map and see a very distinct left turning right angle, thinking back I cannot clearly recall such a sharp turn in the trail, so this must be it, right? I look at either direction. The right looks more defined, but it also kind of looks like an ATV trail. The left doesn’t look quite as defined; however, it would be the sharp left I am seeing on the map of the trail. I. suck in my breathe, send a quick prayer out, and go left.

It isn’t as groomed like the trail had been all along, and I am about to turn back when I see a few fresh-looking footprints heading in the opposite direction. As I had passed some people before, I felt reassured by this and kept going. The trail really starts to dwindle, and I get an uneasy feeling. I am about to turn back again when I notice some of that plastic tape stuff used to mark trails wrapped around a tree. I stuff that uneasy feeling and soldier on. I see some wrappers on the ground that also appear to be somewhat fresh and convince myself that this is further evidence I am on the right path, again, despite the feeling that tells me otherwise.

I follow the tape around the trees, pushing out thoughts of Deliverance style possibilities. I follow and don’t think and find myself at the edge of a small field. Slight panic begins. Ignoring all training, ignoring my instinct, just like a total novice I do the thing you shouldn’t do and walk out into the clearing without making any kind of mark of where I am coming from.

I walk along the edge seeking a clear path (even though it hasn’t been clear for quite some time). I circle back around looking for those tags on the trees, and as I am making my second pass my heart drops when it dawns on me that I have no idea which way I came from. I am completely turned around in this field, no sense of direction, disoriented: lost. I have never been lost. I do not get lost. This concept is as foreign to me as where I am because my father, a former Scout Master, veteran, all around great outdoorsman, drilled into me how to be smart in the woods. If any of you are Arrested Development fans, my first thought was “I’ve made a huge mistake”. I immediately take out my phone and call my husband. He picks up and, luckily, I have service.

Thankfully, he remains calm. I tell him what’s up and he tries calling some other people. I have 9% battery. I was taking pictures all day. He texts me to call 911. I don’t want to, but I do. They transfer me to the sheriff’s office, and he suggests I google map my way out of there. It doesn’t work since it isn’t a viable, established trail. I now have 2% battery. My husband tells me he’s coming down the trail and to start yelling. I ask him to yell back. I have 1%. He can’t because the dog he has with him is a rescue and when he tries to yell for me, she gets scared and runs back up the trail towards the car. I don’t know this. I’m just yelling and not hearing anything in response, and feeling so much more alone and lost than I really am.

I have never yelled that way before. I am an experienced hiker and backpacker, who doesn’t go off trail – I’ve never had to yell that way before. I had gone somewhere between 1.5-2 miles out of the way. To make a long story short, clearly, he does end up finding me. I had prepared myself to be out there all night with my dog. I’m not trying to be dramatic, that’s just where I was at. I had to give in to that idea to prepare myself mentally.

My dog, by the way, is super calm during all of this, even my desperate screaming. We basically ran out of there. A deputy, couple cops, and park ranger were waiting for us at the trailhead to make sure we were okay. I felt foolish, a little embarrassed, humbled, my anterior neck muscles hurt from yelling, I had several ticks on me and what I think is a poison ivy rash but am otherwise unscathed.

The moral of this story? If you have never done this hike before and insist on starting at the end and working your way back, when you get to the unmarked “T” on the trail – go right. Otherwise, just start at the real Backbone trailhead, like a normal person. Also, if something doesn’t feel right, just turn around; don’t ignore that gut feeling. I realized through this, too, that if I am to continue using my phone for pictures, it would be wise to invest in a solar powered portable phone charger. This really is an amazing hike, with views you won’t want to miss, and ample inspiration to photograph. I am going to do this again just, you know, the right way next time.