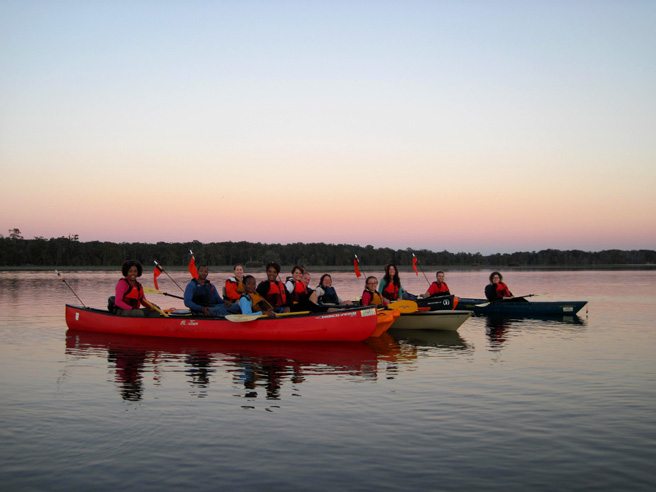 Once we unloaded boats and people at Lake Martin, we found out that this was a group that was in search of alligators, so we headed north.  We meandered through the cypress, stopping to absorb the wonderful sights and sounds of nature.  And what do you know, at a couple of these stops we did see an alligator. Whew! Some days the alligators are everywhere, others you can’t find even one.

We paddled around the north end and what do you know, we saw an osprey perched on a tall snag.  We headed towards it but a bit to the right so we wouldn’t scare it away immediately, we all wanted to take photos.

It stayed a while then took to the sky.  Not far from its perch there were, at least 100, cormorants perched in a group of cypress.  We stopped here for a while to photograph and to listen to them.  When they are making their odd croaking call it sounds like a little city of people talking and moving about.  This is one of my favorite birds at Lake Martin for that very reason.  I can listen to them for hours and just lay back in my kayak to relax.

We did collect some of the last seed pods of the American Lotus to share a snack.  There were not many left but before the end of the trip, participants were collecting and eating their own foraged lotus seed.

As we were about to head back towards the landing, we had a bald eagle fly overhead before it perched atop a cypress snap on the northeast side of the lake near the road.  It was a wonderful paddle and we all enjoyed a meal of red beans and rice as we watched Kevin load the boats on the trailer….Thanks Kevin!!