This trip was sold out weeks before the initial date, the day before the trip there was a last minute cancelation that left us with five anglers. John Williams of Houma and I led this “semi guided” trip to Pointe Aux Chenes. 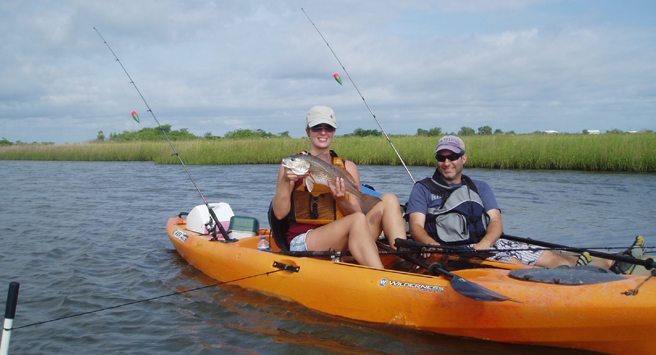 Dennis, Billy, Jeremiah and I met at Pack and Paddle around 4:30 am. This small group followed me to Pointe Aux Chenes where we met Lee, Amanda, and our other trip leader John Williams. John had a route in mind that he felt would be best for the 15mph sustained South East winds that we encountered most of the day. We divided the large group into two smaller groups. Dennis, Billy, and Jeremiah went with John and I guided Amanda and Lee.

After a nice paddle we arrived at a marshy area consisting of small islands and canals with running water. With the conditions the way they were I moved my group into the marsh figuring that the fish wouldn’t be on the normal ambush spots and outer shoreline of the large open lakes. Once we moved further into the marsh Lee threw a topwater lure down a canal and a redfish tried to inhale the topwater plug but missed causing excitement among the group. Before casting back out he allowed Amanda to throw at the redfish. After a nice cast she hooked into the 23” redfish! This was her first kayak fishing trip and her first redfish fight. She brought the fish to the side of the kayak and netted the fish like a pro.

A little time went by as we moved through very narrow channels looking for cleaner water. As Lee and Amanda fished I stood up looking for a way into ponds and dead end canals deep in the marsh. I spotted a nice looking dead end canal with a few ponds breaking off of the dead end canal. Lee worked his way to the back of the dead end and found a very nice 24” redfish waiting for him. The fish pulled Lee around the canal for a few minutes before he landed the fish. His smile as he held the fish up confirmed that he was having a good time.

We covered a lot of water often spooking fish that either couldn’t see the lures due to the heavily stained water or that were in a negative mood.

I pulled up a mapping app on my iPhone and began looking for landmasses similar to the areas that held the two fish that the group caught. I spotted another nice looking area where Lee and Amanda caught three more redfish. One measured 15 ½”, a half inch under the legal slot limit that we released.

During the trip I tried to call John and check on their progress, but the phone reception in the area wasn’t the greatest. Around 12:30 I finally reached him and was informed that they had called it a day. Dennis wanted to come back out and give it one last try as their group hadn’t had much success. I told him how to find our location and we met him with just a little time left. On the way back to the marina Dennis began working a shoreline filled with submerged concrete sheets and oyster reef. After a few casts with a pink “Maniac Mullet” he set the hook on a very nice speckled trout that measured 20”! After taking a few pictures with the fish Dennis said that the decision to come back out was a good one on his part. Even with adverse weather conditions we managed to catch a few fish.

To see all of the photos from this trip, click here!