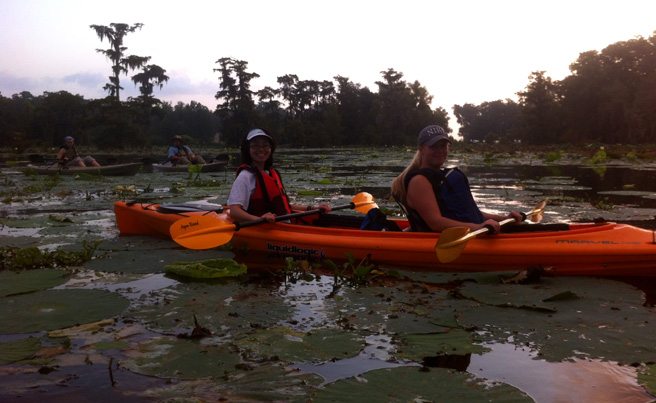 A couple of things were unexpected about this trip,
1) there were 18 people willing to wake up at least by 5:30am to be at Pack and Paddle for 6am, 2) every participant arrived at Pack & Paddle before 6am.

This never happens, there are always people arriving later than the departure time.  I am now considering a time change for all of the trips that I do, maybe we’ll leave at 5am or 4am from now on. HA! So as everyone signed the waiver, I gave some canoe instruction in the parking lot so we could jump in the water when we arrived at Lake Martin.

We got to Lake Martin

as the sun was rising, put the boats in the water and headed south towards the rookery.  A few hundred yards from the dock, I stopped to let everyone catch up and to make sure no one had problems when I heard a pounding towards the southwestern corner of the lake.  It took a few seconds before I realized what it was, I told everyone to head back toward the dock because we were about to get rained on.  We docked on the peninsula on the north side of the boat landing, flipped the boats upside down and waited for the rain to drench us.  Ten minutes later we were back in the water headed towards the rookery.

White Ibis flew overhead in small flocks, as did Snowy Egrets and Roseate Spoonbills. The Great Egrets flew overhead, usually solo, when next to a smaller bird, their slow, lumbering wing-beats are evident. The rookery opened to boats on July 31st so we took a short tour into the rookery to investigate the path that tour boat operators use illegally during the nesting season.  I shared with the group the need to inform Wildlife and Fisheries, as well as the Nature Conservancy, of illegal entry into the rookery during nesting season.  It is disruptive to the nesting waders which can cause nest abandonment, they will leave eggs as well as young if they feel threatened.

We meandered through more cypress and tupelo until we made our way to the far western bank and once again paddled in the open water.  We paddled to the north end of the lake, with a pit stop at the peninsula on the closed trail (the trail is closed due to alligator nesting season) where we took a short break.  We paddled across the lake again to the eastern side in the hopes of meandering through the cypress but it was clogged with American Lotus.

Our arrival at the boat dock was followed with a meal of multiple fruits, boiled eggs, goat cheese with Great Harvest honey wheat bread and all sorts of other goodies from Great Harvest.

Mindy, Missy & Jessica got to see this beauty from their car after the trip!

It was a great morning and a wonderful way to see Lake Martin during these hot summer days.

To see the rest of the photos from this trip, click here!