Special Thanks to Keith Drouant for the photos used in this post.

Recently, I had a super great day fishing with the new Lafayette Kayak Fishing Club in Dulac.

Our day began with a meeting at meeting at the Albertsons in Broussard. Yes- 4:30am. 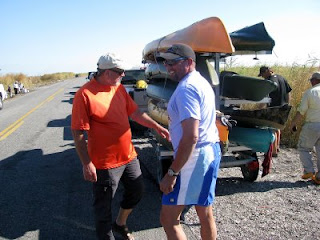 This club is serious about catching fish! After a quick break at McDonalds in , we were at the launch in Dulac just after sunrise. I have not done a lot of fishing with other folks – so it was interesting to see how everyone had their boats rigged up for fishing. 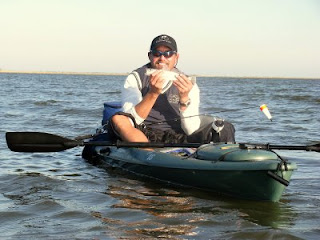 As I fished the corner, I came to an area with a small island near a trenasse. I suddenly had a hit on the purple cocahoe minnow with a chartreuse tail. I missed (of course) and quickly cast back to the same area. I caught several small Speckled Trout in that area before continuing working the points up the bank. Just as I started up the bank, I caught a nice trout. I got him into the boat, removed the hook and turned to put him into the ice chest. That’s when the trout made a perfectly timed flap of his tail, and he was airborne. I guess he earned his freedom.

I was fishing this area with club member Keith Drouant. Keith worked the opening and the island for a while – and I enjoyed watching him fish it and seeing his approach. As I moved up the bank, I got to hang out and talk to other club members. When I reached a sharp point, I heard Karl 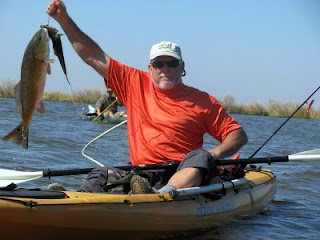 Shexnaider in a battle with a big Redfish. I was so jealous! I needed an adrenaline fix – and small trout were not going to get it done!

I moved across the lake into another area and cast towards an opening. My cork moved across slowly in the way that can only mean one thing: FLOUNDER! I set the hook and pulled in a big flounder that gave me a fit trying to get it safely into the ice chest. I can’t tell you how many flounder I’ve done accidental catch and release for – but it’s a lot. I put my foot on him, grabbed him with the Boga Grip and safely got him into the ice chest.

It was getting late, and I thought I would have to settle for a few small trout and my flounder. But my fishing adrenaline fix was still unsatisfied, so I headed back up the shoreline to fish the points.

I tried to make my mind have a positive attitude. One of the best fishing quotes I’ve read is by Billy Billeaud who says “You’ve got to will the fish on to your hook”. I knew I was almost out of time, but I applied myself to willing a fish onto my hook. The first point produced nothing. As I approached the second point, I cast just off the point and started working the cocahoe back towards me, making noise with the cork. That’s when the cork shot under the water in a way that can mean only one thing: REDFISH!!!

The fish shot out towards the middle of the lake – making the drag on my reel scream. I unstaked my marsh anchor and the Cajun sleigh ride was on! This fish was lively. He pulled me at least 200 yards out into the middle of the lake before tiring out. Having had my fishing adrenaline fix – I headed back to the launch site. 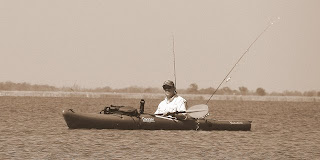 Most of the club was back when I got there, unloading the boats and putting them on the trailer. We all hung out waiting for Keith to come back from the . Pretty much everyone had been really successful on our outing. We all got together for a group picture, and headed for home.

In a way – this day wasn’t a lot different than most fishing days. But since we were able to share the excitement with each other, feed off of each others energy and success – it was that much more fun and satisfying. If you’ve never fished with the Kayak Fishing club, I highly recommend it. This is a great group of guys and girls that love big fish, light rods and small boats – and it doesn’t get any better than that. 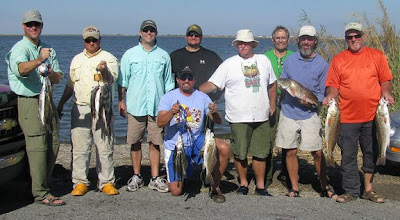