Home It's About the Journey Huge Bass Caught from Kayak

I got an email from Lisa Alexander about a fishing trip that she and friend Regina Womack took with their new kayaks to fish in Lake Valentine up near Alexandria. On the trip, Regina caught a near-state record Largemouth Bass. I have two accounts of the event. Here is Regina’s account: 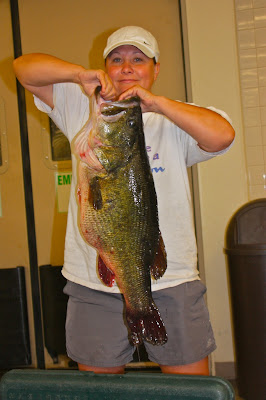 Thursday, May 6, 2010, at 8 PM, I caught a fish of a lifetime. I have fished Valentine Lake in Gardner, La for many of years. I would have never guessed that a fish of this size would be caught out of this lake. Someone pinch me!

That Thursday, my friend, Lisa Alexander and I took one of our many kayak fishing trips to Valentine Lake. We started fishing around 5:30 PM that evening. There were at least three people including a man fishing from the pier not too far from us. Lisa and I fish the southwest end of the lake because of the grassy shallow areas which I call a bass haven. Around 7:45 PM, I was watching the top of the water for any movement and notice a very big swirl on the opposite side of the Lake. I continued to watch and noticed that the swirl happened again in the same location. I decided to give it a few cast before going in for the afternoon.

I was fishing with a weightless worm, Zoom, Mag II plum. I casted out several times and on the four cast, she took it immediately. When she took it, it was like I caught something other than a fish. I was thinking an alligator at that moment. I started yelling at Lisa to come and help me. I didn’t have time to think, I could barely hold the rod and reel in my hands with all the jerking of my kayak. When I got it closer to the kayak I noticed the eye ball of fish underneath the thick grass that she had went through. I reached down into the water to grab her mouth and I felt a little frightened. Suddenly, I realized what I had caught. I pulled this monster fish into the kayak without flipping it, unbelievable! I held on to her with a death grip until my friend Lisa pulled up beside me. She couldn’t believe her eyes and I was so much in shock that I could say anything.

After figuring out a plan to get her in, Lisa tied our kayaks together and made it to the pier where a gentleman helped us put her into my large storage bin of my kayak. It took us at least half and hour to get our kayaks loaded up and head back to Lisa’s house. 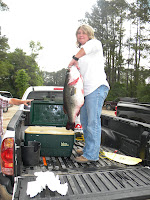 I called my Dad, and both of my brother-in-laws, they didn’t believe anything that I was telling them so I gave up on the phone calls. We got back to the house where I placed her immediately into an ice chest of water. She was barely alive. Lisa took her old meat scales and calibrated a bucket and found her to weigh 16.25lbs at that time. We called Lisa’s dad, which was a retired wildlife and fishery employee and gave us some names and numbers. We then called our good friend, T.W. Thompson, the commissioner in Alexandria, La. I immediately took the fish to the Mayor’s house. Approximately ten people were present and making phone calls to try and find certification. It was close to 10:30 PM by that time she was weighed at Kroger’s in Alexandria, La, weighing her at 15.88 LBS.

Regina Womack an myself took our kayaks to Valentine lake yesterday after work.. we go regularly and always catch a few.. but this is what we left with last night.. .she caught it right as the sun was setting in her kayak… I was about a hundred yards away when she starts yelling.. “OMG.. OMG.. OMG!! Lisa come over here quick.. come help me .. OMG OMG OMG so I paddle over just as she hauls this BIG SOW into her lap… Regina was holding on with both hands to the bass’s mouth and shaking like and earthquake… it was over 16 pounds last nite.. but official weight after losing some.. 15.88 lbs.. will be number 2 in La State record books.. omg.. what a nite!!!!
Both of us purchased kayaks from your establishment and have had many many good times and experiences with them!! Her’s is a Native.. Mine is a Wilderness Tarpon.

Congrats ladies!!!! What a great story.