Home It's About the Journey Cold Water, Warm Smiles – Our Adventure on Black Creek 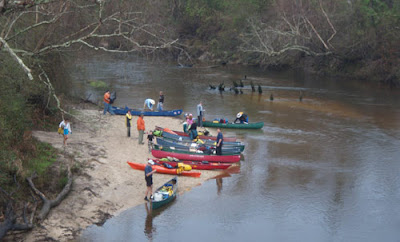 Becky and I just returned from a memorable weekend that was shared by 16 hardy souls on Black Creek. Just south of Hattiesburg, Black Creek runs clear and cold through DeSoto National 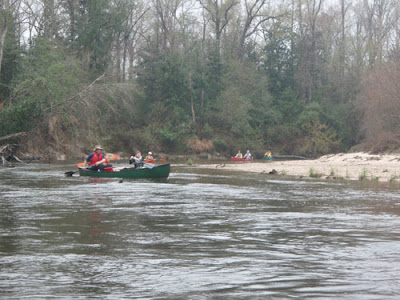 forest. Our route was to take us from the small town of Brooklyn down to the USFS take out called Cypress Creek. This trip was our first time to lead a group down this beautiful section of river.
Our adventure began as we approached DeSoto National Forest and made one last stop in civilization in the small town of Wiggins. With 5 cars following us, Becky and I circled this tiny town several times trying to find the Whistle Stop Cafe where we had planned to eat with the group before hitting the woods. The townsfolk must have thought it a very strange procession to see a car with 7 canoes on a trailer followed by 5 other cars circling over and over again. We finally found the restaurant and enjoyed all you can eat catfish and shrimp.

Thirty minutes later, we were at Moodys launch and our campsite for the night. Thick clouds obscured the sliver of moon above us as the group set their tents up in the dark. A few folks explored down to the edge of the creek, but most decided to turn in.

The next morning everyone was bustling under very threatening skies to pack their gear while the rain held off. We had a quick breakfast and headed for the put in. While on the way, the rains commenced in earnest. We unloaded the boats under the shelter of the bridge as the torrent continued to fall. But luck was with us as the rain had quit before the drivers of the cars returned from running our shuttle down to Cypress Creek.

Once on the river, the group quickly fell into a rhythm. 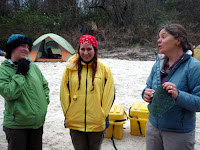 Unfortunately the rhythm was one of those erratic jazz compositions nobody can understand. The upper section of the river is littered with stumps, logs and strainers – all of which are great opportunities to flip your canoe. The group dipped, cut, and dodged its way down the river. We did have one flip over on the first section, but survived it amazingly well.

Six miles down the creek found us having a wonderful lunch on a creek-side gravel bar. We enjoyed wraps with home-made black bean salad, ham, cheese, turkey and hummus. After lunch, we passed several small creeks that flow into Black Creek from either side of the river. Before we knew it, we were at our campsite at the 12 mile mark. Tents were quickly pitched, a kitchen set up and firewood collected. It was getting cold quickly now – but we felt safe and secure on our sandbar along the side of the creek.

That evening, with a fire roaring, we were treated to Becky’s hot gumbo and french bread with home-made 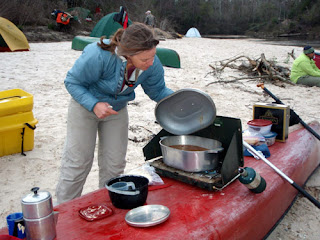 brownies to top it off. We stayed up till paddlers midnight (8:00pm) telling ghost stories and enjoying each others company. The wind was roaring, making the fire twist and turn in the darkness. That’s when we noticed the tiny snowflakes flying in the flashlight beams. 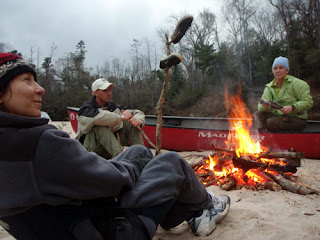 that we would be safe for the night. Back in the tent, we could hear the ice and sleet hitting the top of the tent, driven by the heavy winds. Finally nodding off, I knew that tomorrow would be very interesting – and very cold!

It was a little harder to get everyone out of their warm dens Sunday morning, but we finally got everyone on a roll. After a breakfast of Muesli and Cinnamon bread from Great harvest, we were on the river paddling again. The group resembled the Michelin Man with everyone putting on nearly every layer they had in their bags. Over the last twenty four hours, the group had transformed from an erratic stump dodging jazz improv to a coordinated and smooth symphony. We glided along through forests, bluffs, riffles 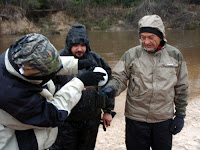 and gravel bars making amazingly good time with the high water and tailwind. By 11, we were only a few miles from our takeout.

We all enjoyed Rosemary Almond Chicken Salad sandwiches with Kettle chips for lunch. Finally, the sun made its first appearance as we ate. With everyone in great spirits, we headed off to a fine finish. Unfortunately even a symphony can hit a sour note.

I came around a bend to see our group stopped and trying to rescue an overturned canoe. We quickly paddled up to find two of our group swimming in the freezing water. They made it to the shore where Becky helped them with changing to warm clothes while Frank and I headed down to see if we could stop the swamped vagabond canoe. We cornered the canoe against the bank, pulled it partially out of the water and quickly flipped it upright. After bailing it out, we towed it back up to the group where our unfortunate friends were trying to catch their breath from the cold water. Soon we were on our way again and minutes later we had reached the end of our trip. 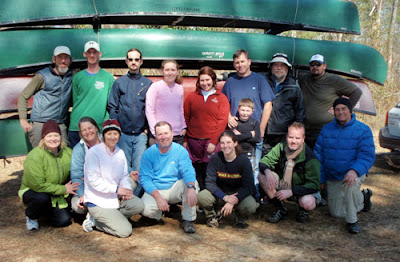 I would like to say thank you to this group for reminding me of how game a group can be under adverse conditions. We had rain, sleet, snow, cold water and much more. This group always had a great attitude and great smiles – making it all worthwhile. Meagan, Eddie, Grant, Steve, Linda, Jim, Roger, Anthony, Lauren, Emily, Gaye, Danny, Duke and Frank – I want to say – that ya’ll are awesome and Becky and I cherished the chance to be with you for this adventurous weekend!