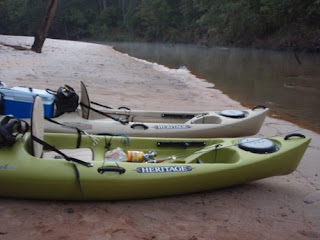 The cool clear waters of the Ouiska Chitto slid silently by the sand beach as we prepped our kayaks. This was a trip that I had been wanting to take since I met Jeshua Smith at Pack & Paddle. He had told me about his passion for fishing creeks that were “small and tight” in kayaks. Jeshua reinforced his talk (and my desire to go) by emailing be photos of stringers of bass they pulled out of these little clear running creeks. 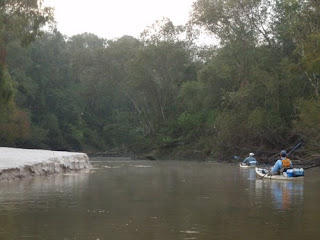 I met Jeshua and his friend Cory at the Calcasieu River Bridge over Hwy 190 near Elton, LA at 6:15 sharp. Jeshua, I could tell, was serious about his fishing and I knew that I didn’t want to be late. We left my car at the bridge and shuttled up to Carpenters bridge in his truck with 3 Redfish 10’s in the bed. We arrived 20 minutes later at Carpenters bridge to a beautiful scene.

The water was crystal clear, gliding over the sand bottom. There was a light mist rising as we paddled down past the bridge. The light was still very low as we started down the creek. Jeshua and Cory explained to me the technique for fishing these small clear running streams. “There’s two ways to fish this. The Buzz Bait is what I call the No-Brainer way of catching fish here. That’s what I put on your rod.” Jeshua had read me right. I will take the no-brainer way of fishing every time. “The other way is to fish plastics like you would for bass in a lake. We like to give the lure a more movement – and swim it off the bottom instead of bouncing it off the bottom like you would fishing bass in a lake”. I threw the buzz bait with the ultra-light rod Jeshua had loaned me for the day. This seemed like something I could handle. 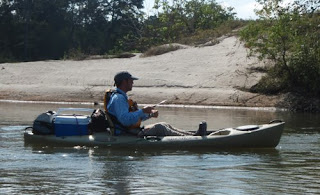 We floated quietly down the creek – looking for deeper “holes” that had a darker look to them – usually around fallen logs and other obstructions. It didn’t take long for the action to begin. Jeshua and Cory had fish in the boat within minutes. My first fish came when a Spotted Bass took my buzz bait off the surface in a slow spot on the creek. I missed a couple of strikes and then landed a largemouth bass. As I fished, I could hear Cory and Jeshua exclaiming everytime they caught a bass (which was often!). The banter back and forth covered lots of topics but always came back to fishing. There was trash talking on both sides for beating their personal creek record fish of 3 pounds.

After a couple of hours, I wanted to switch to fishing the plastic creations that Jeshua was using. It took a little while to get used to the technique: Fish the same dark holes, but throw it in, then work the plastic by raising your rod tip to “swim” the bait. I wasn’t catching, and started thinking about switching back to the buzz bait. That’s when a largemouth bass hit my bait and the fight was on. Same result on the very next cast. Two fish in two casts had me hooked on fishing the sub-surface plastic. 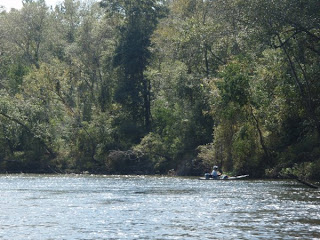 As we fished, we glided past a mixed hardwood and pine forest that was often more than 10 feet above our heads on small bluffs that had been carved out by the creek. White sandbars dotted almost every bend. The water was in constant motion – with no slack pools, making it easy for us to drift without lots of paddling.

Just after lunch (on an inviting sandbar), I was watching Jeshua fish. He would flip his plastic out – sometimes only 5 or 6 feet as he worked the logs and obstructions. I was half watching, half 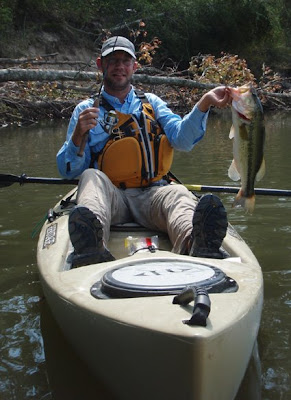 daydreaming when I saw a splash and heard a whoop. I snapped to attention to watch Jeshua’s ultralight pole bend almost in half. He worked at controlling something big that was swimming under his boat towards the brush. A few minutes later, Jeshua was holding a HUGE largemouth bass – grinning from ear to ear. You could tell – he was proud to have bragging rights between him and Cory for their personal record. The fish would later weigh out at 5 pounds 1 ounce.

We caught fish all day long – keeping our limit and throwing back lots of fish. What I think I liked most about this type of kayak fishing was the adventure of it. The creek demanded constant attention to your paddling. Boat control was of paramount importance to be able to work the baits correctly. The clear running stream water was wonderful to fish in. We didn’t see another soul all day long. It felt as if we were the only fishermen that had ever fished this creek. When we were done, we had that good feeling of having worked hard and played hard. And we each had 10 of the most sweet tasting bass I’ve ever tried.

In summary, I wanted to say thanks to Jeshua and Cory for a wonderful fishing experience I would like to repeat very soon! 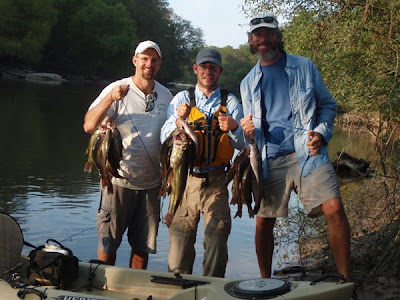