A Weekend Of Local Paddling

Home It's About the Journey A Weekend Of Local Paddling

A Weekend Of Local Paddling 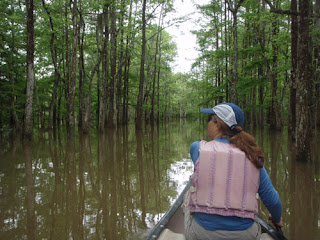 Becky and I were enjoying a cup of coffee at the coffee shop in Breaux Bridge with our friends Mike and Allison Purpera this past Saturday. We were on the way home from our paddle trip to Buffalo Cove. Mike and Allison have been paddlers for years. They have run whitewater rivers in their kayaks in Arkansas, North Carolina, Tennessee, Colorado and many other states. The interesting part of the conversation was about how amazing the paddle through Bayou Gravenburg and Buffalo Cove was, and how easy it is to overlook the beauty and paddling opportunities we have right here in our own backyards. 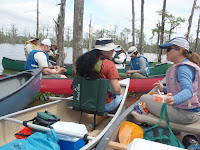 You’ll hear the term “Sportsmans Paradise” tossed around describing Louisiana. This weekend kind of sums up some of the opportunity that out there for us living here in Lafayette.

Saturday morning found us leading a trip into Buffalo Cove – a legendary part of the basin known for it’s serene beauty. Our trip began at 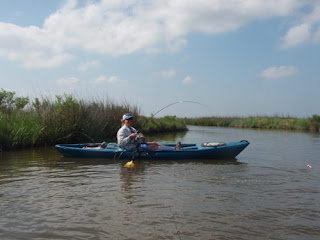 Sandy Cove landing near Fausse Point State park and headed south on the GA cut. We did a portage over a small hump into Bayou Gravenburg and were soon immersed in a forest of Cypress and Tupelo, sliding through water that didn’t have a ripple on it. We slid by a pair of Barred Owls sitting on a tree branch right above us. A Prothonotary Warbler was busily flying around a stump – not concerned in the least at the passing canoes. We met a crawfisherman and his wife in their boat who yelled out “Ya’ll havin’ a good time?!”. When we asked if he had caught anything he held up a crawfish for us to see in a passing salute to 2 diverse groups of Atchafalaya Basin users. On the way home, Becky mentioned possibly going Kayak fishing on Sunday to round out a weekend on the water.

After some advice on where to go from our friend Michael Pears, we headed out early Sunday Morning for Sabine National Wildlife Refuge. Our plan was to fish the marsh, then head down to the coast to fish the jetties from our kayaks. If we had any time left, we planned to visit the Holleyman-Sheely Migratory Bird Sanctuary and do a little birding. We put in and headed out into the marshes. The marsh was alive with bird life and lots of fish. It wasn’t long before POW! a big red took my bait and drug my little kayak around the marsh for a while. We caught our limit 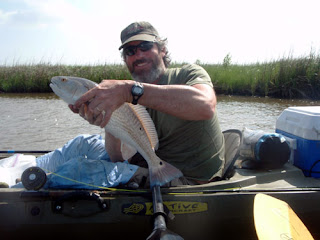 of redfish, 4 nice speckled trout and a couple of flounders. We saw lots of birds and heard a lot of birds we couldn’t see. We stayed in the marsh way too late (having too much fun!) and we were still cleaning fish at 10:30pm.

Between the beauty of our own great wilderness of the Atchafalaya Basin, to the immense opportunity for kayak fishing and birding in the marsh, we truly do live in a “Sportsmans Paradise”. While others may be able to rock climb an hour or two from their house, we have world class paddling opportunities all around us.