Santa in a piroque pulled by his faithful crawfish. 1978 by my sister Louise

This Saturday will be the first time in 42 years that I have not been at Pack & Paddle on the weekend before Christmas.  I have mixed emotions about missing out on the Saturday before Christmas.  Of course, I would never want to miss our son Matt’s graduation from University of Georgia.  At the same time, a lifetime of Christmas at Pack & Paddle makes me nostalgic for the “old days”. 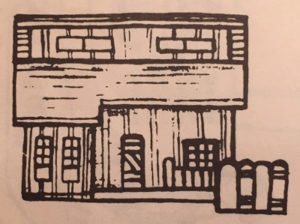 The only drawing of the first section of our current location. By my sister Louise 1977.

One of the best stories of Christmas at Pack & Paddle happened the first year we were open in 1974.  We had stocked up for a big season and after Thanksgiving and the first week of December, sales were dismal.  My parents decided that we were all getting gifts from Pack & Paddle since we had so much inventory.  My brothers and I were pumped about this!   Gifts were wrapped, brought home and put under the tree.  Then 2 weeks before Christmas, sales took off.  Soon gifts were being grabbed from under the tree and brought back to the store to sell.  Funny now – but maybe not so funny back then! 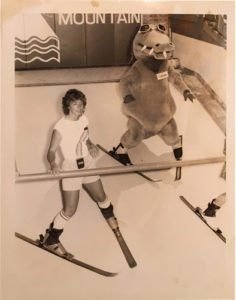 Skiing on the ski deck!

Every year, we all worked at the store throughout December.  When we were younger, my brothers and I would wrap gifts.  Our wrapping station was outside under the old shed roof.  It was usually cold (unlike this year!) and we hated wrapping presents.  When one of the staff (usually one of our sisters) would bring presents to get wrapped, we would say “Quit telling people we wrap gifts!!!”.  Then we would do the (probably horrible) job a 12-14 year old boy would do gift wrapping (in a box with wrapping paper and ribbon – with gloves on!).  Sometimes people would laugh when they saw the finished packages.

Late on Christmas eve, the family would all be at the shop.  Sometimes we would go out to eat (if it had been a good year).  But no matter how successful a year it was, I remember to my core the feeling of accomplishment when it was all over.  As a team, we had been creative, put our best efforts forward and the community had come in and supported Pack & Paddle.

I thought it would be appropriate to put some photos of “the old days” for you to reminisce and enjoy! 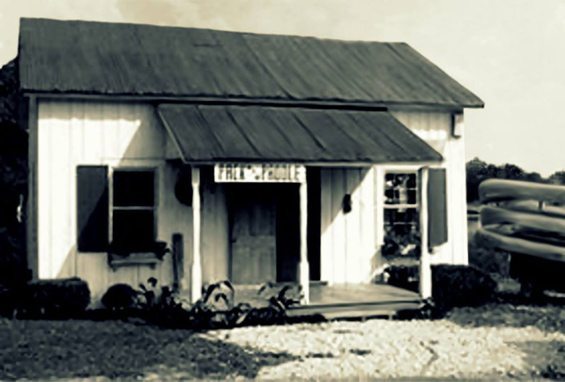 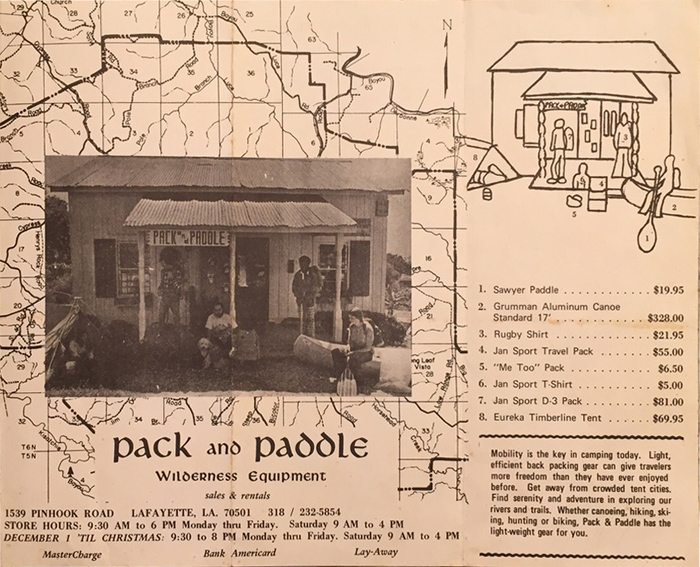 The first mailer in our old location where the Hilton is currently. 1975 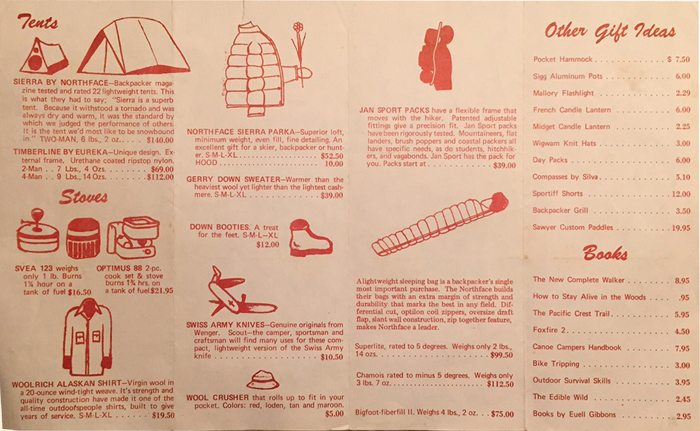 An early mailer containing drawings by Louise. Love the down jacket with the flower! And look at those prices!

A mailer featuring our ski deck. Love the headline!